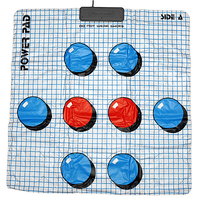 Side A of the Power Pad

The Power Pad is a 1988 special floor mat controller for the Nintendo Entertainment System. Nintendo originally did not produce the Power Pad as it was produced by Bandai as the Family Trainer for the Famicom in 1986, however Nintendo acquired the rights later. It was also known in North America for a limited time as Family Fun Fitness.

It involves player stepping on to the buttons on the mat to control the game, and is usually plugged into the second controller port.