From NintendoWiki, your source on Nintendo information. By fans, for fans.
(Redirected from SF Memory Cassette)
Jump to navigation Jump to search 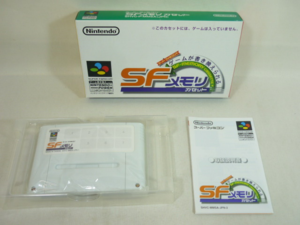 These "cassettes" were designed for the Japan-only Nintendo Power cartridge service, as with the Game Boy Memory Cartridge and come with special sticker spaces for the player to make note of the games they installed onto the cassette.

The cassettes have a special boot menu in which the player can choose which game to play, with a text feed at the bottom of the screen.

Game selection menu from a cassette