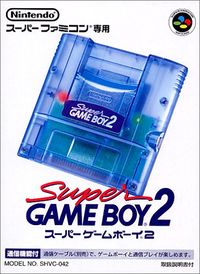 The Super Game Boy 2 was released in 1998 and featured various new features including: