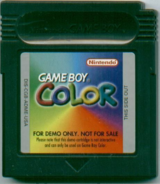 The Game Boy Color Promotional Demo was a tech demo and Game Boy Color cartridge shown at store kiosks outside of Japan. It serves as a promotional video showcasing some of the capabilities of the then new console, with its own special music.

The Nintendo logo is flashed on the screen, followed by a chalkboard scene that reads in multi-colored chalk: "NINTENDO GAME BOY Now in COLOR". The video then cycles through texts "Escape To Color", "Plays Over 400 Game Boy Games", "More Processing Power", "Color LCD Screen", "Infrared Communication Port" while showing footage from Tetris DX, Wario Land II and The Legend of Zelda: Link's Awakening DX, a scene with the text "Game Boy Color" surrounded by multi-colored pipes, and a scene that reads and has Mario walking across the screen. There is another scene with a Game Boy Color Mario appearing to turn a Game Boy 'light switch' on; making the background appear colorful. An original Game Boy Wario attempts to pull it, but the logo falls down and squishes him.

According to an unused debug menu, there were considerations to promote F-1 Race and Alleyway that never made it into the final video.