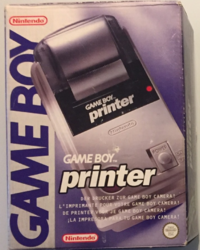 Its purpose is to print images from compatible games on small rolls of thermal Game Boy Printer Paper. Individual sheets are adhesive-backed and 3.8 cm (1.5 in) in diameter, and can be used as stickers by peeling off the adhesive. The Game Boy Printer uses six AA batteries.

It is compatible with all Game Boy models (including the Game Boy Advance) except for the Game Boy Micro. A Link Cable is required to connect the printer to a Game Boy.

A successor known as the Game Boy Printer Color was also in development according to Mario Artist: Paint Studio data-mining, but silently cancelled.

The games in this list are published by Nintendo. The exception is Chee-Chai Alien, an outlier series (similar to Glory of Heracles series) given Nintendo acquired rights to the franchise and published the successors, Nonono Puzzle Chalien and Spin Six.

The player may print out photos of characters and scenes from The Little Mermaid, unlocked through minigames through playing the two pinball games.[1]

The player may print out collectible stickers known as DK Sticker Packs from the selection menu. These are found in specific levels in each world. The stickers are stored in the Sticker Book.

The player may print out user-generated or preloaded Album-B photos, some of which are hidden. The available preloaded photographs vary on the language of the game (Japanese or English), or the special edition (including The Legend of Zelda: Ocarina of Time Game Boy Camera, CoroCoro Comic Pocket Camera and Hello Kitty Pocket Camera. In Hello Kitty Pocket Camera, photographs taken from frames on The Strawberry Channel are similar to the preloaded Album-B photos (as the Album-B does not exist in this version, but The Strawberry Channel animations (with variable unlockability requirements) are preloaded in to the game).

The ability to print is available after clearing the first dungeon, entering the MonTac Centre, talking to a lady at the counter, and choosing the "P"/プリント option on the menu that follows. The player can print Mon-Tac (monsters) obtained by the player, with variations based on size.[2][3]

The player may print out from one of a total of 13 photographs taken by the Photographer and obtained at different points in the game, from the The Travels of Link photo album. However, only 12 can be taken and one of the photographs assumes Link stole from the shop; which would change the player's name to "THIEF".

The player may print the title screen, various characters, scenes, objects related to the Mickey Mouse franchise. Photos are unlocked by winning races and completing certain other tasks. It is possible to gather nuts and trade them to Chip n' Dale for the Print Shop Key.[4][5]

Note this excludes the Korean version of Pokémon Gold and Silver. The Game Boy Printer features are mainly the same as Pokémon Yellow, but now the party Pokémon printing is accessed from an NPC at the Photo Studio in Cianwood City. It is also possible to print mail, and stamps at the Ruins of Alph if every entry of Unown is unlocked in the new Pokédex. It is not possible to print out a Pikachu's Beach highscore, because the minigame does not exist in the games.

It is possible to print out the highscore tables.

The player may print a single card, a list of a custom deck configuration, a list of every card owned by the player.

The player may print out Pokédex entries, the Pokédex diploma from Celadon Condominiums if the player has a complete Pokédex, a list of Pokémon from the Pokémon Storage System, party Pokémon (via Pokémon Fan Club Chairman), and the Pikachu's Beach minigame highscore. The Pikachu's Beach minigame requires a special Surfing Pikachu in the original non-Nintendo 3DS Virtual Console releases of Pokémon Yellow (by trading it from Pokémon Stadium after defeating the Master Ball division with Pikachu in the player's team).

There is also an unused printer debug function in the code, which when called would print out a copy of what was currently displayed on the screen (though whether this was the intended use is unknown).[7]

Print out cards collected by the player, including card-battle monsters.[8][9]

The Game Boy Printer's job will take into consideration the number of sheets to print (between 0 and 255 with 0 meaning a line feed only), the margins, the palette, and the exposure setting (-25% darkness and +25% in the official manual).[10]

When attempting to print, an error code will appear if the printer job has failed (i.e. with the notation "Printer Error [n]").

Additionally, a game may include the error message "This is not the Game Boy Printer!", as found when data-mining Pokémon Yellow Version.[12]

The following games which originally supported the Game Boy Printer are available on Nintendo 3DS Virtual Console in at least one region:

As the Nintendo 3DS does not support use of or emulation of the Game Boy Printer, printer functions are disabled with patches over the original ROM. The ROMs are not modified directly, but the patches are applied with the emulator itself (similar to the patches used for Super Mario 64 in the Nintendo Switch game Super Mario 3D All-Stars).