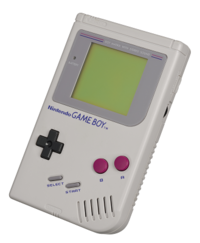 The Game Boy was Nintendo's first portable console. It was one of the best selling game systems of all time, selling around 118,690,000 units world wide before discontinuing in 1998.[1] Due to its overwhelming popularity, the release of the Game Boy Color was actually pushed back due to the strong sales it still had.

The first Game Boy was released in 1989. This original Game Boy was large and gray, with a monochrome dot matrix screen, monaural sound with integrated speaker and stereo sound with headphones. It was playable for an average of 35 hours with four AA batteries. Many peripherals were released for it through its time, the more popular ones being the Game Boy Printer and Game Boy Camera. The Game Boy was also later released with five differently colored bodies.

At the Nintendo World store, there is a Game Boy on display that survived an explosion in the Gulf War. While the screen had to be replaced, the internal circuitry was still operational without any modification.

The first version, a silver reproduction, did not include an LED indicator of battery levels. This feature was added in later models due to popular demand, along with multi-colored units.

Similar to the Game Boy Pocket but with a color screen. It can also support more pixels on the screen. Backward compatible with the Game Boy.

An improved version of the Game Boy Color with a trapezoidal design and better graphics. It is also compatible with the GameCube.

It features a clamshell design and boasts the ability to be played in the dark without an external light source using its frontlight. It also has a lithium rechargeable battery as opposed to previous models' AA battery requirement.

A second redesign of the Game Boy Advance which has been criticized due to its lack of backwards compatibility with Game Boy Color games; and the fact that it was released after the Nintendo DS, but lacks many of its features.