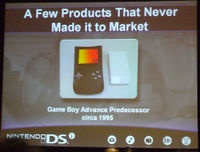 The Game Boy Advance predecessor as shown at GDC 2009, compared in size to a Nintendo DS Lite.

The "Game Boy Advance predecessor" was a handheld game console intended to be the successor to the Game Boy. According to Masato Kuwahara, the system was in development around 1995, and was intended to launch before the 1996 Summer Olympics.[1]

As with the other Game Boy iterations, the device had a similar form factor and button layout to the original Game Boy, though it was much larger than the other systems. It also had two additional face buttons, similar to the layout of a SNES Controller. The hardware would have featured a color LCD screen, and used a 32-bit ARM7 CPU.[1] The system was ultimately cancelled due to its impractical size and performance issues related to the inefficient ARM7 graphics engine.[1]