Metroid Prime Hunters is a first-person adventure game in the Metroid series, and a spinoff of the Metroid Prime sub-series. Initially announced at E3 2004, the game was developed by Nintendo Software Technology, and released in 2006 for the Nintendo DS.

The Hunt is On
A ferocious race, now extinct, has left behind relics of its once-powerful warrior culture. Now bounty hunters from across the galaxy race to claim these relics in hopes of harnessing their power for themselves!

Single-Player Mode!
Uncover the mystery behind the Hunters' quest for ultimate power in the action-packed single-player mode!

6 New Bounty Hunters
Use each Hunter's unique abilities to take on friends and rivals!

Intense Wireless and Wi-Fi Multiplayer Action!
Battle online via the Nintendo Wi-Fi Connection or with friends over local wireless!

Who is the Galaxy's Most Elite Bounty Hunter? Before Metroid Prime Hunters, the answer was easy. Now that six other ferocious bounty hunters have gathered to challenge Samus, the title is up for grabs. Metroid Prime Hunters delivers the most intense first-person multiplayer action ever experienced on a hand-held system, and with Nintendo Wi-Fi Connection you can test your skills against players from around the world.

From its stunning graphics to its super-smooth gameplay, Metroid Prime Hunters showcases the awesome power of Nintendo DS. The Adventure mode is a fun diversion, but it's the multiplayer action that will keep you playing this game for years to come. With Nintendo Wi-Fi Connection, you'll always have a pool of hunters waiting to challenge your skills.

Metroid Prime Hunters delivers an engaging single-player experience, but without a doubt it's the multiplayer arena where Hunters shines. The game features seven multiplayer modes of play, over 20 battle arenas, and seven bounty hunters to choose from, each with a unique alternate form and special weapon.

Four players can compete using just one game card, and additional features and modes of play become available if each player has his or her own copy of the game. With Nintendo Wi-Fi Connection, you can put your skills to the test against other players from around the world. You might be able to school your little brother, but how will you stack up against the globe's elite bounty hunters?

Here is a quick overview of the seven modes of play in Metroid Prime Hunters, available in both local and online play.

Battle -- Anything goes in Battle Mode, where your goal is to eliminate your opponents in a timed deathmatch. Rack up more kills than your competitors to score a victory.

Survival -- In Survival Mode, you begin the game with a limited number of lives. The goal is simple -- drain your enemies' stock of lives before your own runs out and be the last hunter standing.

Bounty -- Fight for the possession of an Octolith and be the first hunter to deliver it to the drop point to succeed in Bounty Mode. This is pure bounty hunting at its finest.

Defender -- Defender is how bounty hunters play King of the Hill. Secure the designated area and accumulate points while you are the only hunter to occupy it.

Prime Hunter -- Gain the coveted enhanced powers of the Prime Hunter, and see how long you can keep them while the competition tries to end your reign. Keep Prime Hunter status the longest to win.

Capture -- Your goal in Capture Mode is to raid the enemy team's territory and steal their precious Octolith. Score when both Octoliths are safe at your base.

Nodes -- Explore the arena to find Node Rings, and earn points while they are under your control. The hunter who reaches the point goal first will win the match.

In the single-player Adventure Mode, Samus embarks on a quest to find powerful relics left behind by an ancient warrior culture. But Samus isn't the only bounty hunter on this mission. Along the way, she'll have to fight off the galaxy's most elite hunters who hope to harness the power for themselves.

Each of the seven bounty hunters in Metroid Prime Hunters has a unique alternate form and special weapon. Which hunter will be your favorite?

Samus -- Samus Aran is well-known throughout the galaxy as an efficient and experienced bounty hunter. Few other hunters can compete with Samus's long history of successful missions, most of which were carried out against seemingly insurmountable odds.

Trace -- Trace is a Kriken, one of the most hated and feared races in the galaxy. Every Kriken, when he reaches a certain age, is exiled by its clan for a rite of passage. Trace is currently in exile, traveling the galaxy looking for planets to expand the Kriken empire.

Noxus -- Noxus is a member of the Vhozon, a proud and reclusive race that inhabit the outer rim of the galaxy. A spiritual being who walks a harsh, righteous path, Noxus has become a Bounty Hunter to administer justice to the galaxy’s criminals and evildoers.

pire -- Spire is thought to be the sole remaining Diamont, an ancient race of silicon-based lifeforms whose bodies are composed of organic rock. Spire travels the galaxy as a bounty hunter searching for information on the location, or fate, of the rest of his people.

Sylux -- Little is known about the mysterious bounty hunter known as Sylux, other than the fact that Sylux harbors an intense hatred for the Galactic Federation and the bounty hunter who has helped the Federation time and time again -- Samus Aran.

Weavel -- Once a powerful Space Pirate General, Weavel was critically wounded during an altercation between the Space Pirates and Samus Aran. With just his brain and spinal cord still functional, his body was fused with a mobile life support system.

Kanden -- A lab experiment gone awry, Kanden was created to be the ultimate soldier. However, stress from the neural combat encoding sequences was more than Kanden’s still-mortal brain could handle, and left him ferocious, deadly and dangerously unpredictable.

The hunt is on!

A ferocious race, now extinct, has left behind relics of its once-powerful warrior culture. Now six other fierce bounty hunters from across the galaxy will challenge Samus in a race to claim these relics in hopes of harnessing their power for themselves.

A ferocious race, now extinct, has left behind relics of its once-powerful warrior culture. Now six other fierce bounty hunters from across the galaxy will challenge Samus in a race to claim these relics in hopes of harnessing their power for themselves.

The story of Metroid Prime Hunters is set between Metroid Prime and Metroid Prime 2: Echoes. Many years ago, the ancient Alimbic race went extinct, leaving their treasures to be scattered across their system. In the present time, the Galactic Federation receives a telepathic message, telling them that "ultimate power" can be found in the Alimbic Cluster. The Federation secretly sends Samus Aran to investigate, though several other bounty hunters intercept the transmission and head to the Alimbic Cluster to claim the power for themselves. 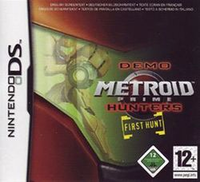