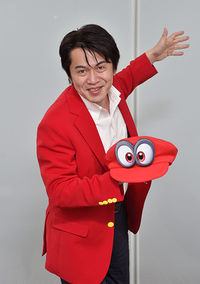 Yoshiaki Koizumi (小泉歓晃) is a Senior Executive Officer at Nintendo and Deputy General Manager of Nintendo EPD. He was born on April 29, 1968. He is known for his work on the 3D Mario series.

He studied at the Osaka University of Arts looking to become a film director. After graduating, he found a position at Nintendo working on manual editing. His first game was The Legend of Zelda: A Link to the Past where he great expanded on the game's lore in the manual. His work on that game led him to be accepted as a script writer on the game's sequel, The Legend of Zelda: Link's Awakening.

His art skills also contributed to games in the Nintendo 64 era where he made major contributions to major Nintendo titles like Super Mario 64 and The Legend of Zelda: Ocarina of Time. He made his directorial debut in Super Mario Sunshine.

In the early 2000s when Nintendo was preparing to establish a Tokyo office for Nintendo Entertainment Analysis and Development Division, they selected Koizumi to lead it. He started this position with Donkey Kong Jungle Beat. As Nintendo EAD Tokyo grew, so did his position eventually becoming one of EAD's Group Managers. His role at EAD Tokyo led him to be selected as a Director for 1-Up Studio. With the restructure into Nintendo Entertainment Planning and Development, he was chosen to a Deputy General Manager alongside Katsuya Eguchi. With successes such as Super Mario Galaxy and Super Mario 3D Land behind him, Koizumi was selected to become the general producer of the Nintendo Switch. When Nintendo acquired Dynamo Pictures in 2022, he was appointed as a Director of the newly renamed Nintendo Pictures