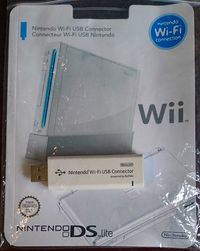 The Nintendo Wi-Fi USB Connector (Japanese: ニンテンドーWi-Fi USBコネクタ) was released on November 23, 2005 in Japan. It was "powered by Buffalo Technology" (a business that would become Melco Holdings, Inc.).

This device would connect to a computer that had broadband Internet but no active Wi-Fi support, so that the Internet connection could be used for Nintendo Wi-Fi Connection.

A similar device was also released, known as the Nintendo Wi-Fi Network Adapter.