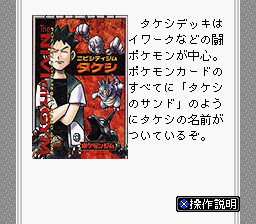 Information about the Brock Deck in Gekkan Coin Toss