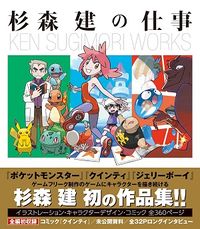 In addition, rare manga are collated in the book; such as Mendel Palace and Jerry Boy manga, as well as a few frames from Lemmings, Maido Osawa ga Seshimasu (毎度おさわがせします), Valkyrie no Bouken: Toki no Kagi Densetsu manga.

A long interview is also included in the book.